Towards mixed reality with a VR headset on

The VR headset adds a totally new and easily discernible dimension to viewing site designs. The latest technology has now been adopted for the first time in Finland at NCC’s office construction site OOPS in the Hatsinanpuisto district of Leppävaara.

The new Finnish headquarters of the measuring device and software company Trimble is rising at the OOPS construction site in Leppävaara where the new digital tools are being tested for the first time. Owing to the co-operation we have been able to pilot the very latest hardware and software advances in design and construction. As a digitalisation engineer I am happy to pass the message of digitalisation on to others and  develop the work flows together.

The HR10 HoloLens VR headset by Trimble was introduced in 2019 and deployed at the OOPS site in spring 2020. The first experiment was rather absurd, but with more practice and experience the new tool has become a natural part of our everyday life. Based on half years’ experience we can already say that this is an interesting system which will certainly find many different uses in the future.

What on earth is mixed reality?

Virtual reality ”cuts” the user out of the external world and takes them into a fully virtual environment with the aid of a VR headset. On the other hand, augmented reality brings additional visual information onto the screen of a transparent device. The very latest advance called mixed reality (MR) mixes virtual reality with the real world.

MR technologies allow to lower the fences between the real world and the digital world. Through the VR headset you can see both the existing and the virtual reality which enables you to compare the designs directly to the prevailing situation as you move around the site.

The VR headset allows to visualise information, get into grips with mixed reality in the daily work at the site, and to access places in ways which would otherwise be impossible. Compared to designs printed on paper, this technology makes a huge difference. Through the VR headset you can see instantly how to fit a pipe end at any one point, or you can open the records for any one object, make measurements and comparisons between the designed and the built, then forward the data with the image attachment to the designer.

As easy as taking a new cell phone into use

The headgear looks rather like an ordinary construction helmet, except that you have the visor instead of the goggles at the front and the battery at the back. Such a headset is suitable for working in interior spaces, but outdoors and in the terrain we use the Trimble Sitevision which includes a controller resembling a big joystick which is held in one hand, a GNSS receiver and a mobile device.

The system has a Windows-based user interface and it is quite easy to use. Of course, new things will always require some practising until they become routine. Learning to use Trimble’s new tool could be compared with taking a new cell phone into use.

At OOPS, the VR headset is being used by the HVAC & E installation team who have welcomed the innovation with enthusiasm. The technology will open even more opportunities along with viewing and comparing designs, such as following up the completion degree and carrying out measurements at the site.

Switching over to remotely-held reviews

In practice, the headset scans the environment with the aid of in-built sensors, and the BIM appears in the field of view of the user. When the BIM is placed in the real world, the user moves to the desired spot where a comparison can be made, for example, between a pipe shown in the BIM and a pipe that is installed at the site. Was the installation successful, in other words, did the reality meet with the design?

Wearing the VR headset the user can also send live streaming video directly from the construction site to a remotely held meeting. This allows the multidisciplinary expert team to follow up the progress of the site and review the details. The remote teams can view the construction site in real time, draw and add their observations directly to the BIM. This has afforded the company with new opportunities in solving everyday site routines during the corona pandemic.

Mixed reality and the VR headset offer a new dimension to the construction site. The feedback and experiences have been positive. The new technology is considered feasible and it facilitates following up the works.

We keep our promises and want to show it too

Adopting a new technology at the site takes some time. Since nothing similar had ever been seen at  Finnish construction sites, OOPS represents the forefront of the industry. Learning new things requires overstepping a certain threshold and being prepared to experiment.

MR makes it easier to manage the details and to develop the design and modelling process. It speeds up the work at several different stages, adds to the understanding and reduces the risk of mistakes. Being able to monitor the building site remotely with the client is also a great advantage to growing trust in our work. We want to show that we always do what we have promised. 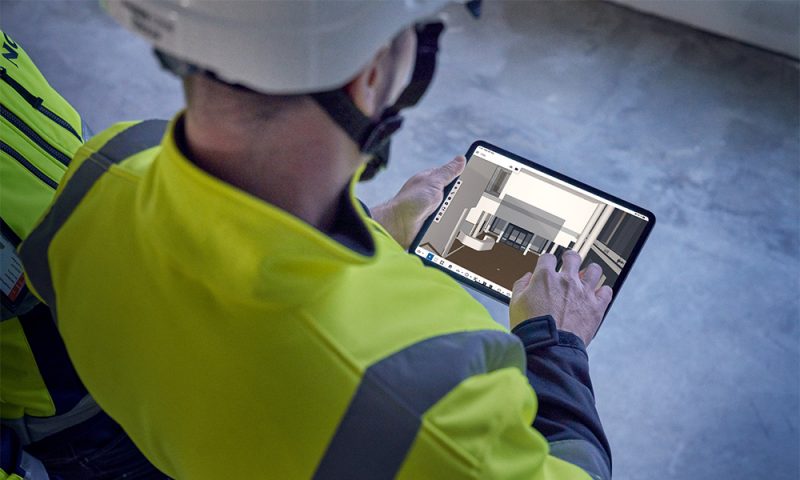 Although there is still a long way to go, we already see a bright future ahead of us where the latest technology has a growing role. There are lots of opportunities, so it will be interesting to see all the applications in which mixed reality can be used.

Make a virtual visit to the site www.oopsespoo.fi

Buildings A and B completed at NCC OOPS office site have just now been awarded the international BREEAM Excellent environmental certificate. The buildings are designe

The first OOPS office property located in the heart of Espoo is constructed using the latest technology and data from the office construction as never before. NCC and

We care about your integrity

We and our trusted partners sometimes store and / or gain access to information from a device you use when you visit our website, such as unique IDs in cookies which in some cases are personal data. You can accept or manage your selections by clicking below or at any time on the privacy notice page. These choices will be transferred to our partners so that your choices are followed. See our cookie policy and list of partners here.

We and our partners process data for:

Settings Accept all
Accept all

These cookies are necessary for the website to work and can not be turned off in our systems. They do not store any personally identifiable information.

These cookies allow us to count visits and traffic sources so that we can measure and improve the performance of our website.

The performance and effectiveness of ads that you see or interact with can be measured.
Back Confirm choices